A Wellington man who claims police threatened him with trespassing from an Anzac Day memorial if he displayed an Armenian flag in memory of genocide victims says it is “shameful”.

He said the exclusion was bowing down to an authoritarian Turkish regime, while a lawyer said he was flouting basic human rights.

The genocide of one million Armenians by the rulers of the Ottoman Empire is one of the terrible chapters in human history. Turkey disputes the death toll and the genocide label, but most scholars and many countries recognize the events as genocide.

For a few years, without incident, Richard Noble went to Wellington’s Ataturk Memorial on Anzac Day to silently protest the New Zealand government’s lack of formal recognition of the extermination.

This year, he introduced himself to a policeman on site to let him know he was going to be holding his Armenian flag, but was told it would be offensive to Turkish officials. 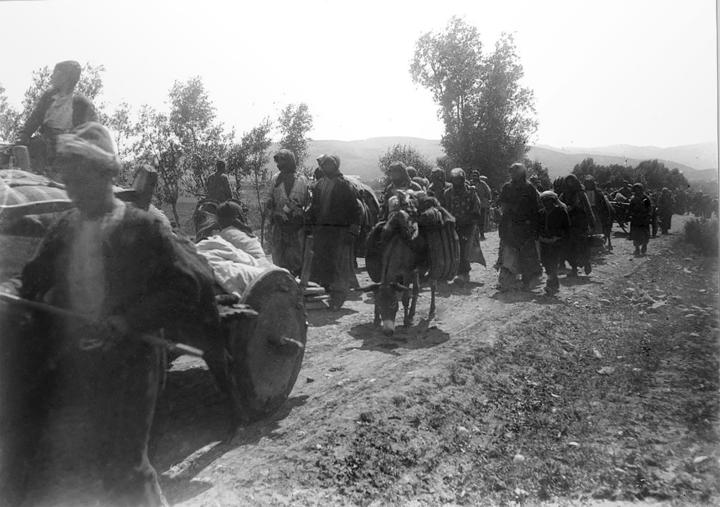 Masses of Armenians were deported from Erzurum during World War I, many to the desert, and few survived.
Photo: Victor Pietschman.

Noble said the officer told him he had been given permission by Wellington City Council to walk in on anyone carrying an Armenian flag – at the request of the Foreign Office and the Turkish Embassy – which they both deny.

“It was a disgraceful and timely decision on the part of the council to circumvent my freedom of expression guaranteed by (…) [the] Bill of Rights to protect the sensibilities of an authoritarian and repressive regime,” Noble said at a council meeting yesterday.

Noble said he left the council-owned area that day but stood out on the public road with his flag.

He said he was a member of the RSA and his grandfather fought and was injured at Gallipoli – and his action was in no way intended to denigrate the solemnity of the event. 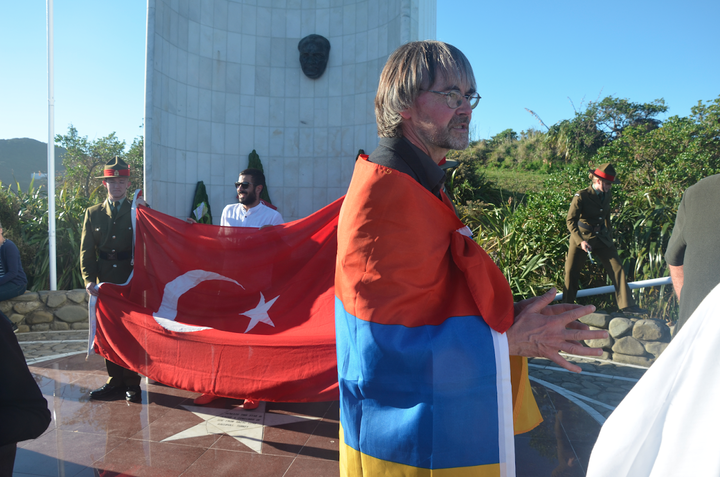 Richard Noble protesting for recognition of the Armenian Genocide, at the Atatürk Memorial in 2017
Photo: Supplied/Richard Noble

Wellington City Council said it supported people’s right to protest and had delegated power of trespass to the police on Anzac Day.

He denied ever being asked to arrest or deter those protesting against Turkey.

Police said they “have been informed that a flag the man intended to display may be offensive to people of Turkish origin attending the service.”

He said a senior officer told Noble he would be asked to leave if he displayed the flag, and that he could be arrested for trespassing if he did not comply, but that he was the welcome to stay if he kept the flag at bay.

“The man subsequently left the service without incident. He was not arrested or issued a trespassing notice.”

He said it was hard to find rights in the Bill of Rights that weren’t infringed.

Ewen said it wouldn’t hold up in court, and the fact that Noble’s protest took place at an Anzac event didn’t change that.

He said it was a terrible idea for the board to delegate power this way.

‘It’s devastating for us’ – Armenia demands apology from police

Maria Armoudian, a lecturer in politics at the University of Auckland, said many of her family members had been devastated by the genocide and the Anzac Day incident was traumatic.

“It’s devastating for us, (…) deeply disturbed by this.

“Your wounds can’t heal without some kind of acknowledgment that what happened in the past was wrong.

“We just want our history to be recognized and everything that’s been taken from us, and taken in the most brutal and violent way – that’s not asking so much.”

Armoudian wants an apology from the police.

New Zealand must strike a difficult balance while standing up for human rights in the face of mass arrests and other human rights abuses by Turkish leader President Tayyip Erdogan.

Last year, the New Zealand ambassador joined nine international diplomats in calling for the release of a jailed Turkish businessman and philanthropist.

raised the spectre] New Zealand being denied access to the Gallipoli Peninsula for official Anzac celebrations.

Meanwhile, authorities in other parts of New Zealand are feeling pressure to avoid offending foreign powers.

Christchurch City Council has refused permission for a community council to reinstate a flag above a Sumner Community Centre.

A memo from the council cites the cost and possible impact on international relations if the flags of Taiwan, Tibet or West Papua are flown.

He said there were no council-run flags in other suburbs other than the city’s airport which displays the national flags of the city’s sister cities, so strong justification was needed for install one in one suburb but not the others.

Christchurch has seven sister cities, two of which are in China.

The head of the mayor’s office and chief executive of Christchurch City Council, Jonathan King, said the memo was not provided to the mayor and councilors before it was sent to the community council.

Advisers informally expressed concern about the protocols and asked staff to review them, King said.